Predicting events, when they haven't happened yet

Suppose you have to predict the probabilities of events which haven’t happened yet. How do you do this?

Here is an example from the 1950s when Longley-Cook, an actuary at an insurance company, was asked to price the risk for a mid-air collision of two planes, an event which as far as he knew hadn’t happened before. The civilian airline industry was still very young, but rapidly growing and all Longely-Cook knew was that there were no collisions in the previous 5 years [1].

Where do you start?

Let’s think of the years as a series of Bernoulli trials with unknown probability \(p\). That’s a likelihood. If I start with an uninformed prior, such as a Beta(\(\alpha,\beta\)) with \(\alpha=1, \beta=1\) then I can use the concept of Bayesian conjugates to update my prior believe.

Wikipedia lists 51 notable civilian mid-air collisions since 1922, including helicopters and space crafts. Since 1955 there were 11 incidents that had more than 100 fatalities, the last one in 2006. 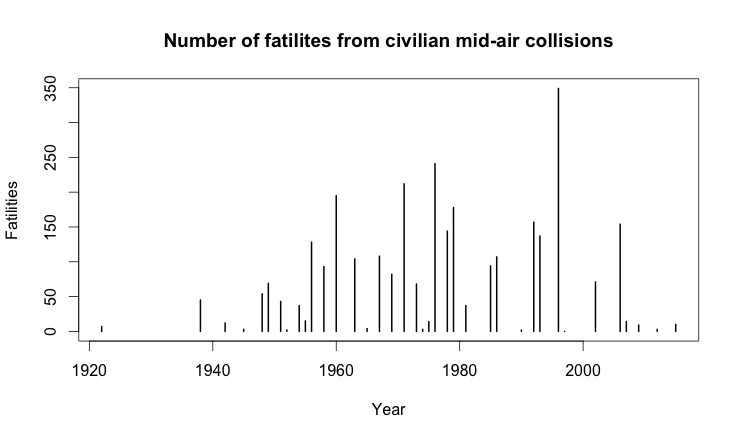 Interested in the application of R in insurance? Join us at the 3rd R in Insurance conference in Amsterdam, 29 June 2015.