Who will win the World Cup and which prediction model?

The World Cup has finally kicked off last Thursday and I have seen some fantastic games already. Perhaps the Netherlands appears to be the strongest side so far, following their 5-1 victory over Spain.

To me the question is not only which country will win the World Cup, but also which prediction model will come closest to the actual results. Here I present three teams, FiveThirtyEight, a polling aggregation website, Groll & Schauberger, two academics from Munich and finally Lloyd’s of London, the insurance market.

The guys around Nate Silver at FiveThirtyEight have used the ESPN’s Soccer Power Index to predict the outcomes of games and continue to update their model. Brazil is their clear favourite.

Andreas Groll & Gunther Schauberger from the LMU Munich developed a model, which like the approach from FiveThirtyEight aims to estimate the probability of a team winning the world cup. But unlike FiveThirtyEight, they see Germany to take the trophy home. 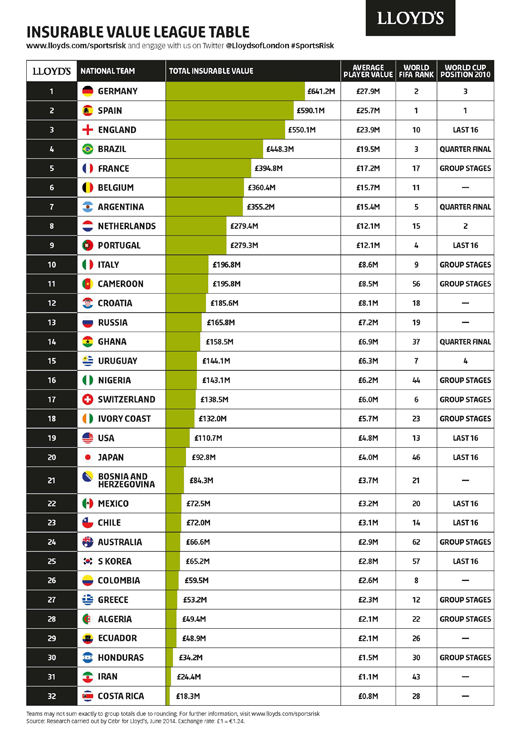 Research carried out by Cebr for Lloyd’s, June 2014.

Here are the three rankings combined in one table. None of the three predictions have put the Netherlands into the top 5, despite the fact that they played against Spain in the final four years ago. Interestingly, as of this morning the bookmakers favourites are Brazil, Argentina, Germany and the Netherlands with implied probabilities of about 25%, 20%, 18% and 7% respectively.