The evening was sponsored by Revolution Analytics, who provided funding which went towards the Kölner R user group Meetup page. We had a good turn-out with 18 participants showing up and three talks by Dominik Liebl, Jonas Stein and Sarah Westrop.

Dominik Liebl presented ideas of his forthcoming paper/vignette with Oualid Bada on Panel Data Analysis with Heterogeneous Time Trends. Dominik and Qualid are also working on an R package to make their ideas more easily accessible. Their package phtt is currently only available via R-forge. However, Dominik’s live demos suggest that the package is useable already.

Jonas Stein presented his sitools package to the group. Jonas is a physicist, researching the behaviour of chilled crystals (~ 4 Kelvin) under the influence of high voltages. His work may lead to new data storage technology in the future. The data he collects in his experiments is measured in many different units and magnitudes and to help with the handling of such data he developed the sitools package, which does just that. Jonas mentioned also two functions outside his package he has found particularly useful:

Sarah Westrop gave an introduction to the knitr package with RStudio and web2py. She showed us the basic concepts of Markdown. Sarah gave a live demo of RStudio and knitr, and demonstrated the value of naming code chunks: it is not only easier to return back to a specific chunk, but also graphics will be saved automatically under the code chunk name, rather then Chunk-1, etc. Using a web framework like web2py allows her to publish her output quickly on the web, including login and comments.

Following the hard work we deserved a beer or two. The next meeting will take place on 6 February 2012. That’s one day before carnival starts in Cologne. Please get in touch if you would like to present or attend the meeting. 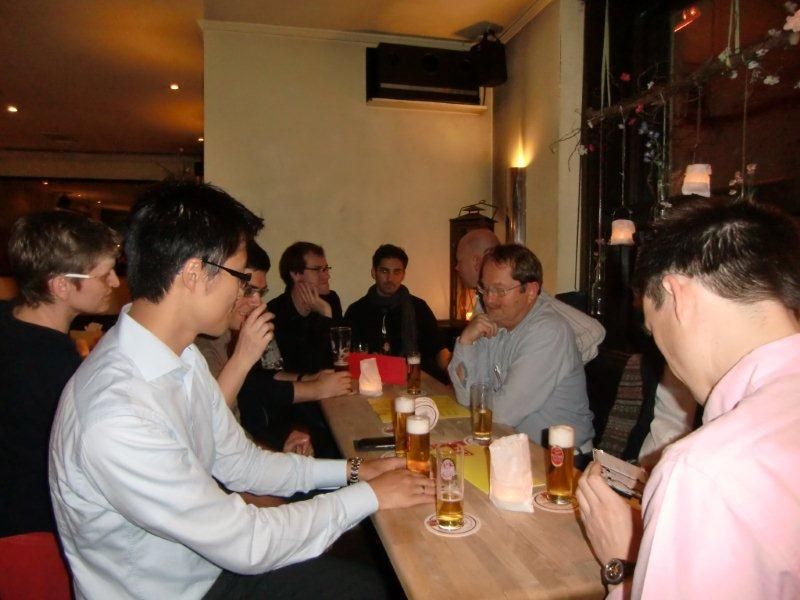